Apocalypse Live! You Can't Stop the Children of the Revolution

Brooks dove headfirst into the snow.  His body began to melt into the glorious comfort of the cold.  Sweet cold.  Wonderful cold.  He couldn't resist.

A quick yank sent his shirt over his head.  Another, his pants.  And he lay comfortably on his back in the luxurious cold.  His breath froze in the air above him and turned to ice.  How was he so hot?

He looked into the hazy sky and saw the sun.  The blinding orb shielded itself behind the thin clouds.  Brooks squinted anyway.

It traced a lazy path along the sky with such ease.  He relaxed and allowed himself to close his eyes in a luxurious, elongated blink.

It must have been the fever or the heat that caused his hallucination.  He could have sworn as he opened his eyes the sun jumped through the sky at break neck speed to rest a full hour later in the murky brown atmosphere.

"Brooks baby?!"  It was Alex, risen from her blast furnace and worried.

Judy took a gloved hand and threaded the needle a little too slowly for Evan to ignore.  She bit her lower lip as the thread passed through the eye.  It was almost seductive.  Was she flirting with him?

The blush was there and passed up from his toes to the top of his head.  It wasn't helpful when she offered her gloved hand to him and he placed his hand in hers.  She was so gentle.  He could almost feel her skin through the glove.  It was intoxicating.

"This might hurt a little."  She winked at him, "But your a big strong man, you can handle me."  Her voice had a faint hint of static.

Evan closed his eyes as sweat pooled behind his knees, "I'm sorry, what did you say?"

"This might sting a little, but we've given you some medication to help with the pain."  Judy's voice was clear as a bell.

Evan opened his eyes to look at her, "Thank you."


Judy looked up at him, a perverse grin spreading across her once sweet face, "No problem at all baby.  We're going to fix your hand and maybe I can give you a hand later..."  The static returned.  Evan's pulse jumped and his palms started sweating.  He felt his body seize up and his toes started to go numb.

"Ha...ha...this isn't happening,"  He looked away from Judy and began laughing.  Her hand massaged his hand.  He felt her other hand find his knee, or was that his inner thigh.

"Are you alright?"  Her voice rang clear again.  "It probably is better if you don't look.  We can get you a bucket to throw up in if you want."

"No, I just...long day...something is really wrong with me...I have been having some hallucinations from blood loss I think...I...uh"

Rayne's voice popped into his head, "They're going to take you away haha!  HOHO!"

Evan looked at Judy.  The angle she sat staring at him left a clear view to look down her shirt.

"Pervert," mumbled the voice in his head.

The floodgates opened and complication washed in an embarrassing flush of hormone, lust and panic.  This was not going to end well.

Frederick found the way.  His imp strength, which is more than most give imps credit for, was enough that he could shove his razor sharp claws into the cliff face.  This gave him the leverage he needed to lift his feather light body against the wall.  He would then pull hard, tearing his claws from their beds and wait for them to regrow.

Regrowth was speedy for the viewer, but slow torture for the host of the regrowth.  Blood gushed like fetid sludge down the side of the cliff face.  Fred felt his nerves breath in the putrid air as the cells creating his new nails multiplied, fighting for their identity in his body.  They died and hardened like stones on his fingers.  With unknown strength he slammed his sharpened nails into the cliff face, ripping the lower limb free causing a new wave of nauseating agony to wash over him.

The glint of non-darkness told him the suffering was worth it.  The pain would be worth the glorious shining thing awaiting him as he scaled the endless chasm.  He hoped.
Posted by Lilly Nelson at 10:25 AM No comments:

Bitter Bloggings from and Optimistic Actress: You're gonna be a STAR!

I have decided to try and blog more.  So for the next month I am going to try to blog at least once a day, even if it's a short blurb.  Like today.

I like the character roles. Somewhere back there I really came to the conclusion in my mind that the difference between acting and stardom was major. And that if you become a star, people are going to go to see you. If you remain an actor, they're going to go and see the story you're in.

As I show people clips of the work I have done over the past few years I am amazed at how many people immediately respond, "WOW, you're going to be famous one day."  It's, very often, the only compliment people know how to give to any actor.  They are amazed at how we "get up in front of people."  Astonished we can remember lines.  Amazed at how "real" we are.  Our worst performance can be received as a golden ticket to fame. 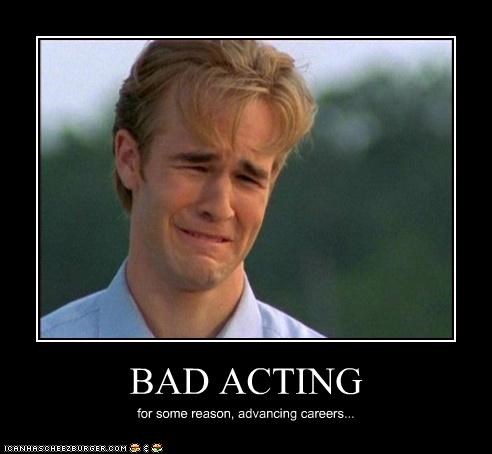 While I know this is meant as a compliment on the job I am doing, there is a very large part of me that dies a little inside.  At times, I honestly want to punch a wall at this statement.  But I don't.  I smile and take the compliment. It's all they know to say.   Can you really fault someone for not knowing?

Why does this seemingly innocuous statement throw me into fits of rage?  Well for one thing it puts a value on my craft.  It says that good acting equals stardom therefore bad acting equals hobby or no stage time.  While I wish acting was a business where the folks who could act were promoted and those who couldn't were weeded out, sorry, it's not how it works.  See all the terrible actors out there who are still working.  There are terrible actors out there who are stars.  Why?  Because of this statement.

Stars are their own entity really.  Look at ENTOURAGE.  Vinnie Chase is a prime example of a star.  He's attractive and popular and was given the great opportunity to act in amazing films.

I have never heard more true words on art than those spouted from the mouth of J.K. Simmons in the trailer for Whiplash.

There are no two words in the English language more harmful than 'Good job.'  "You're gonna make it."  "You should be famous."  "I can't wait to see you're name in lights." All these statements equal one phrase.  "Good job."  Good job is mediocre.  It's okay.  It's, hey I don't know enough about you or acting to make an accurate assessment of your abilities.

What do I want to hear?  You made me feel something.  You made me think.  This is what I want.  You should be famous doesn't do me any good.

But then again, that's just me.

Posted by Lilly Nelson at 10:32 AM No comments: